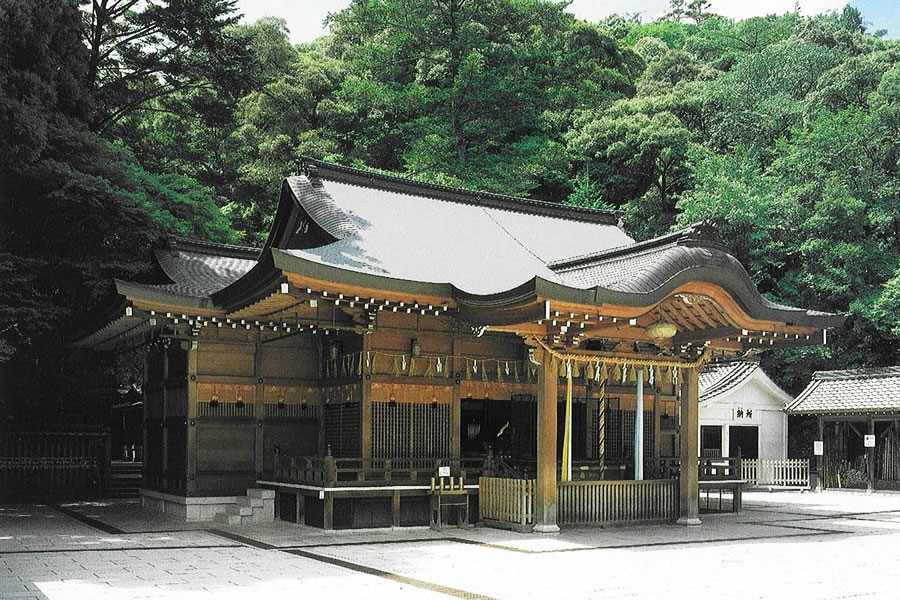 Coming through the San-mon main gate and following a stone-paved slope and stone steps with a large gingko tree at the back, visitors finally reach the Ten-dô hall at the top of the steps. This building consists of the Haiden oratory, which faces to the east and the annexed Yokuyu-dô section. An esoteric ritual, “Gogyô-nyôhô-yokuyuku”, which worships Sambô-kôjin and Kangiten-son is held solemnly three times a day in this hall, playing peace, prosperity, love and happiness. As it is an esoteric ritual, no visitor is allowed to participate in it. 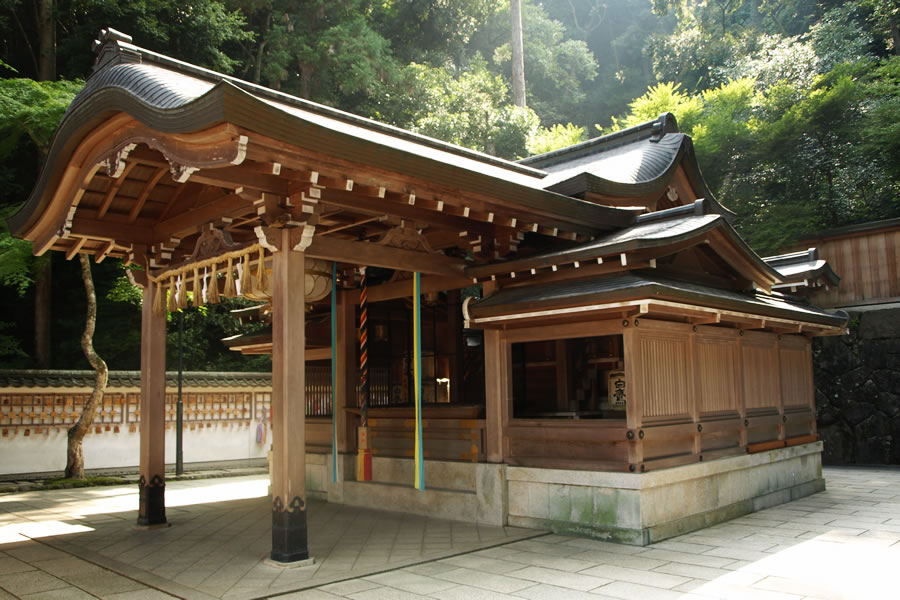 Gohô-dô hall, which is often called by another name, “Gohonsha”, is a shindenzukuri-style (or shrine-style) architecture, and is located across a stream from the Ten-dô hall. A statue of Daishôkongô-tenrin’ô is placed in the front section of the hall, a statue of Kangidôji is on its right side and a statue of Benzaiten is on the left side. Many folded-paper cranes and votive tablets are hanging on the wall as offerings to the Buddhist deities. 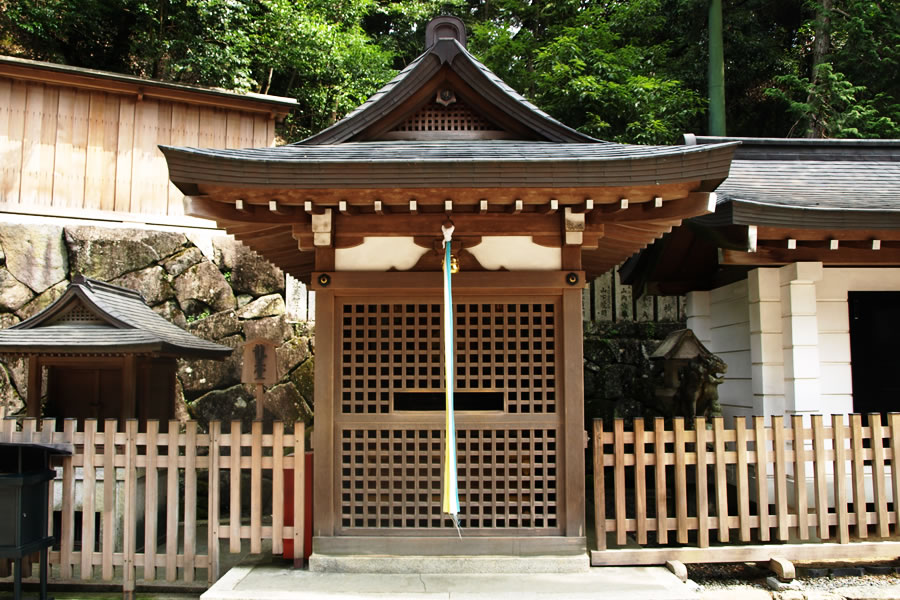 The principal image enshrined in this hall is Zennyo-ryûô (Nâgarâja), which is a deity of water and is believed to protect all the living things. It has been especially worshipped as a guardian deity of brewery, agriculture and fire-protection since old days. 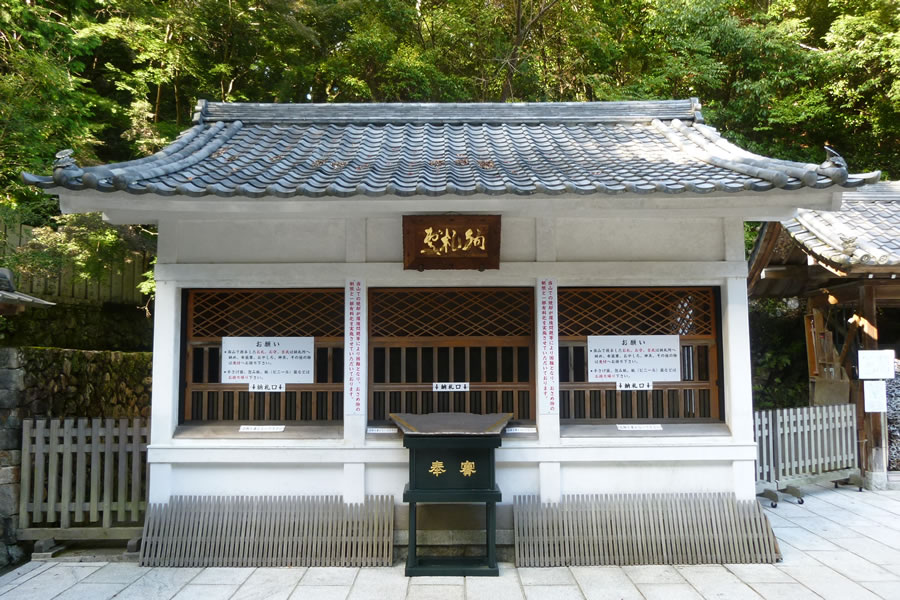 The principal image enshrined in this hall is Myôken-bosatsu (Sudrsti or deity of the Polar Star). Old talismans and old figurines of Hotei – one of the Seven Deities of Fortune – are returned to this hall. People return old figurines which they got in the previous year to this hall, give thanks to the deity for fulfilled wishes, and get a larger figurine to keep at home for the next year. 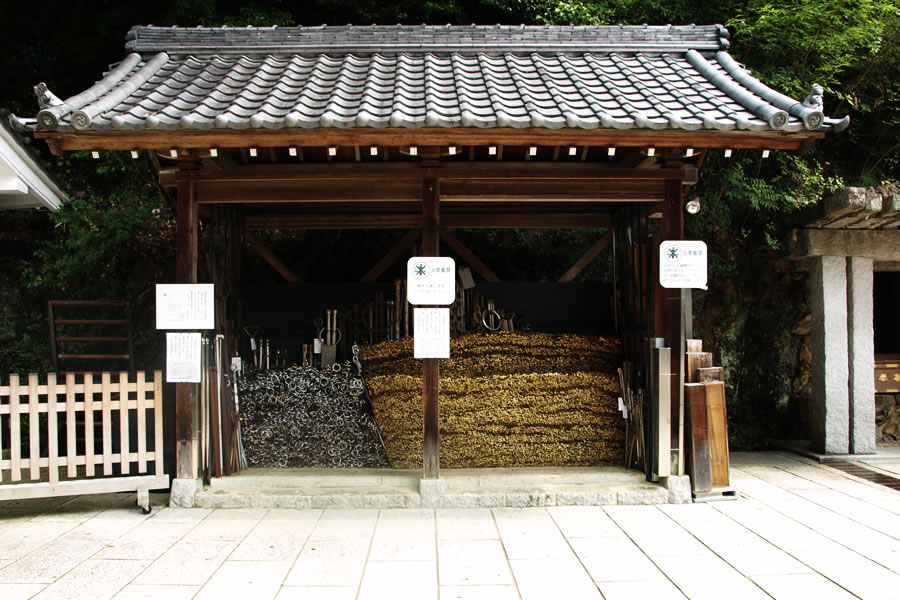 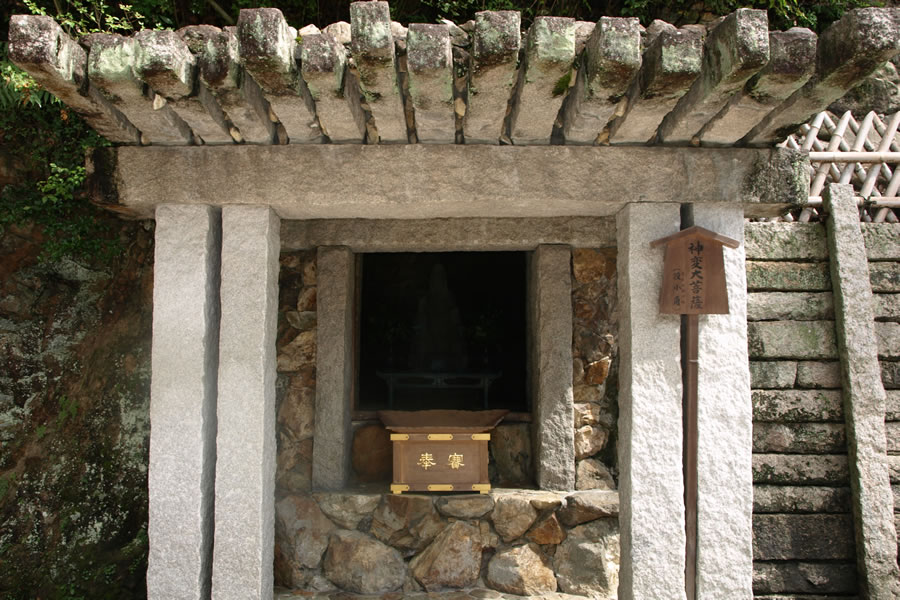 This shrine is located by the path along the slope. One night during the Meiji period (mid 19th – early 20th century) Priest Ninzui and Priest Kôjô of this temple had an identical dream of Inari-myôjin, a deity of agriculture. Since then this deity has been enshrined here. 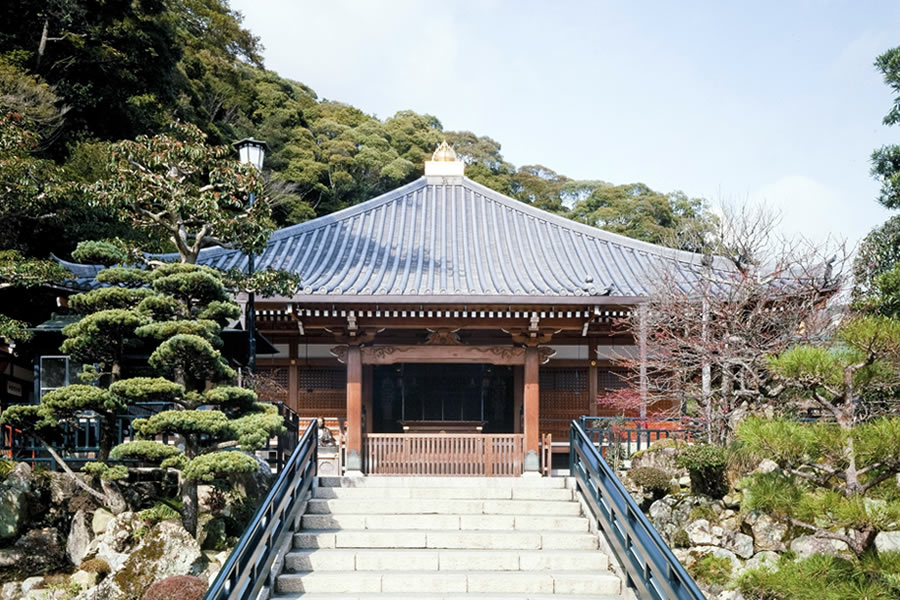 The original structure of this hall, which is as significant as Ten-dô hall in the temple, was founded during the Ansei era (1854-1860). A statue of Dainichi-nyorai (Vairokana) is placed in the front section of this hall. A statue of Fudô-myô’ô is on its left side, and a statue of Priest Kûkai (Kôbô-daishi) is on the right side. A large Mandala platform, which is a symbol of Shingon esoteric Buddhism, is set in the inner section of the building. A reliquary stupa is placed at the center of the Mandala and esoteric ritual implements are placed along the four sides of the Mandala square. An esoteric ritual for a Buddhist deity, Daishô-fudômyô’ô, is held every day in this hall. Today’s building was completed in 1993 after five years of renovation of the old building. In front of the hall, a seated statue of Binzuru-sonja (one of the sixteen Rakan or Arhats) is placed.

Reception for those requesting stamps for the following: a set of three deities including the temple’s central deity Dainichi Nyorai, the guardian Kiyoshikôjin, and Hotei of the Seven Gods of Good Fortune; Station 72 from the Eighty-eight Pilgrimage Sites of Settsu Province; Eighteen Head Shingon Temples Pilgrimage Circuit; and Hyogo Station 14 from the Pilgrimage of Sacred Buddhist and Shinto Sites. 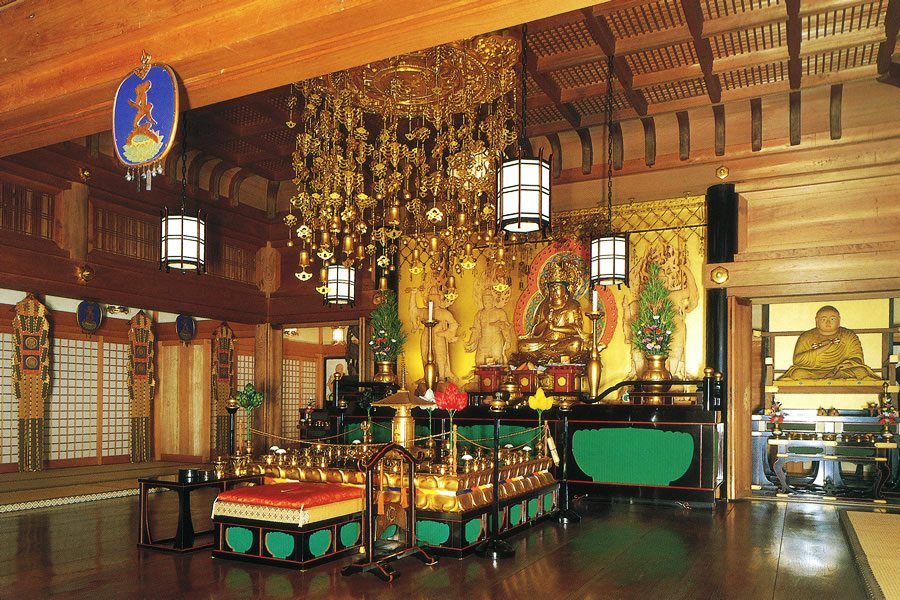 This hall is located at the back of the Hon-dô hall. More than twenty Buddhist statues, with a statue of Dainichi-nyorai (Vairocana) as a principal image, are housed. Monks pratice their Buddhist training in this hall.

Ichigan Jizô-son (Statue of Ksitigarbha for one wish) 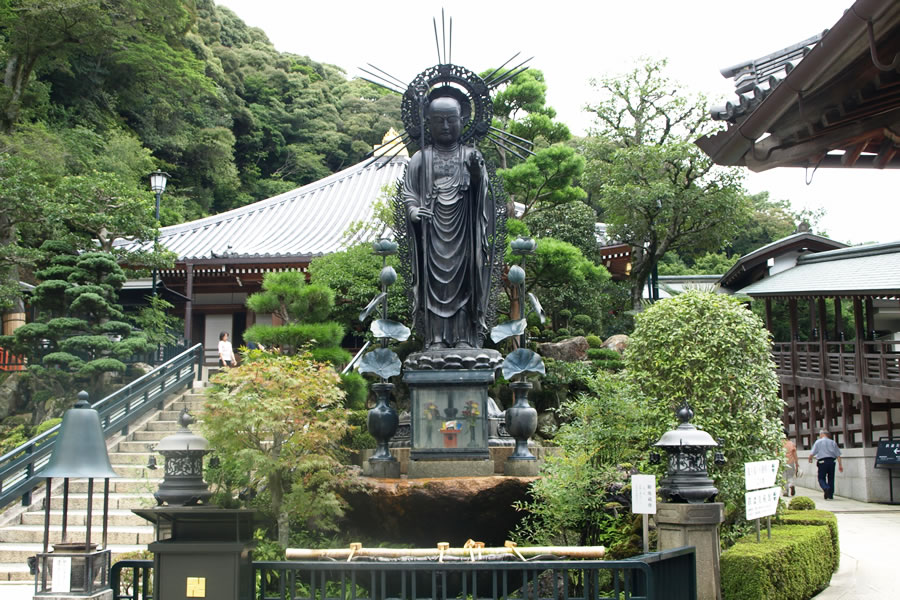 There is a gushing spring at the foot of the stone steps in front of the Hon-dô hall. It is said that if visitors pour water over the large bronze statue of Jizô (Ksitigarbha) by the spring, making only one wish, the wish will be fulfilled. This Jizô is also called “Mizukake Jizô” (Jizô to pour water). 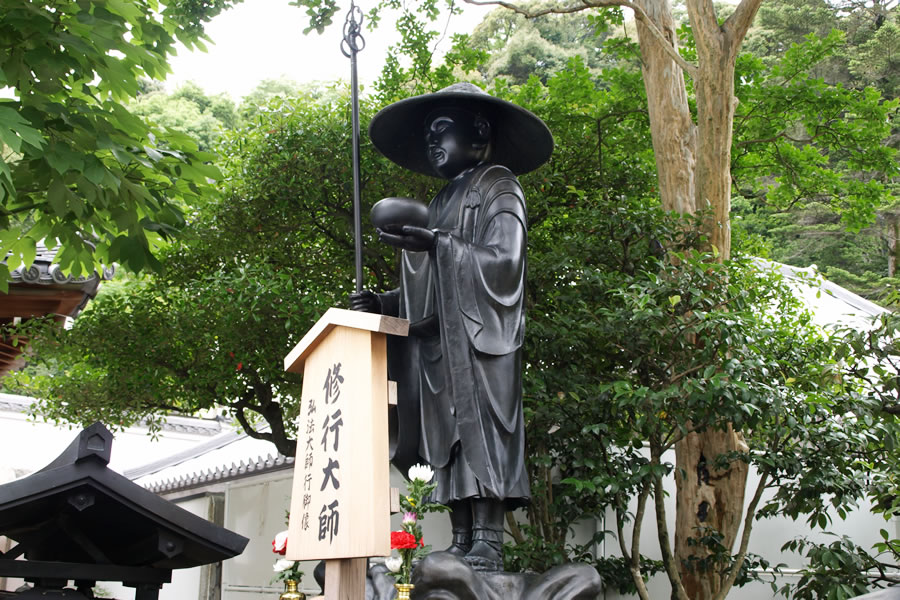 A founder of Shingon esoteric Buddhism in Japan in the costume of pilgrimage with a Buddhist stick and a bowl in his hands. He used to travel around the country in this style. This statue is often called “Shugyôdaishi-sama” which means Priest in the ascetic practices. 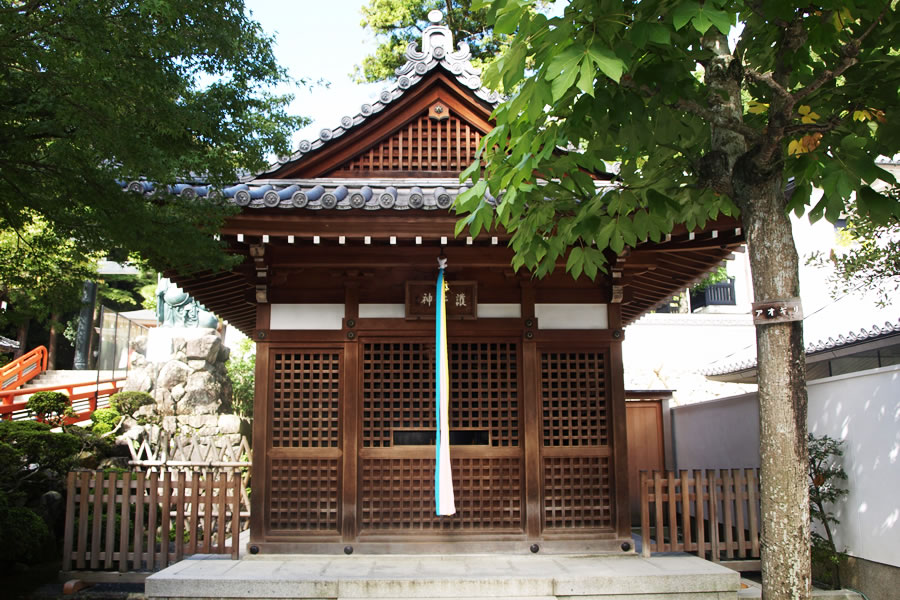 This small hall is located by the path which leads to the Ten-dô hall. A statue of Gozuten’ô, a guardian of Gion-shôja temple (Jetavana Anâthapindikârâma) in ancient India, is enshrined in the front section of this hall. Gozuten’ô is known as a Buddhist deity of lucky directions who protects people from misfortune. The rear section of this hall is used to burn holy fire “Goma” (Homa) as part of monks’ Buddhist practices.

Besides of these major temple halls, there are about thirty-eight structures on the green mountain including the San-mon gate, Shôrô bell tower, Kyôzô archives of Buddhist scriptures, Kenzoku-dô hall, Gokusho hall for offerings, monks’ quarters, Hyakuren-dô hall, Shunkô-an subsidiary temple, lecture hall, Ugai-an subsidiary temple, a storage,Seihô Bunka Kaikan (culture hall), and Seikô-den museum. The number of Buddhist and Shinto deities enshrined within the compound is more than forty. It is one of the characteristics of our temple that all of them are the deities of happiness and prosperity, worshipped by pious visitors wishing for love and peace in life. 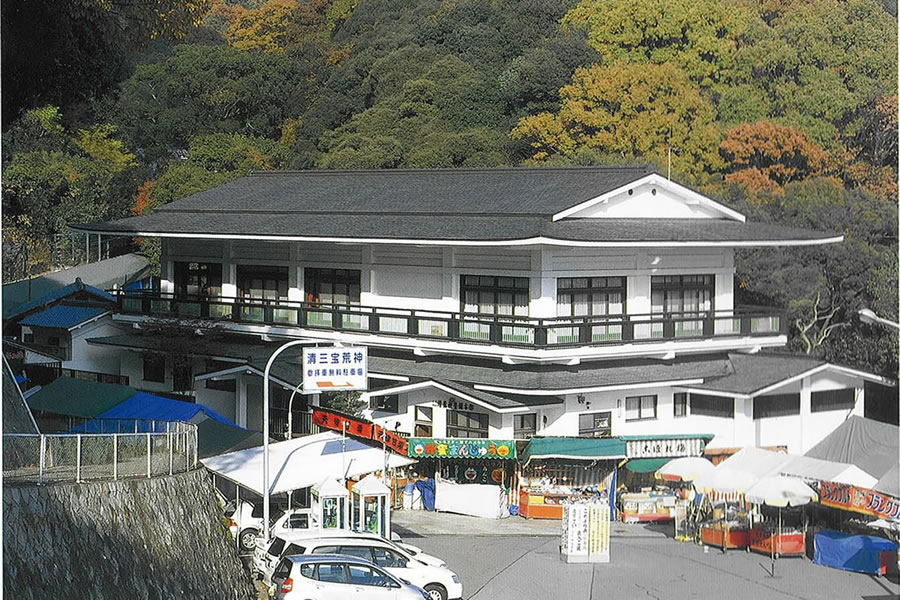 A lecture hall and meeting rooms can be used for free for art-related or social welfare activities. Anybody who pays respect to deities of our temple may borrow the rooms as this facility was founded for the purpose of promoting cultural activties.

The ferro-concrete, two storied building of the Seihô Bunka Kaikan is located by the large parking lot in front of the San-mon gate. A large lecture hall of 60 tatami mats and meeting rooms of several sizes are available on request. The use of the rooms is for free, but as there are several regulations to use the facilities, inquiries about details should be directed to the front desk of the hall.

The Kiyoshikôjin office of the Takarazuka Police Station is located within this hall for the safe worshipping at the temple on festival days and during the weekends.